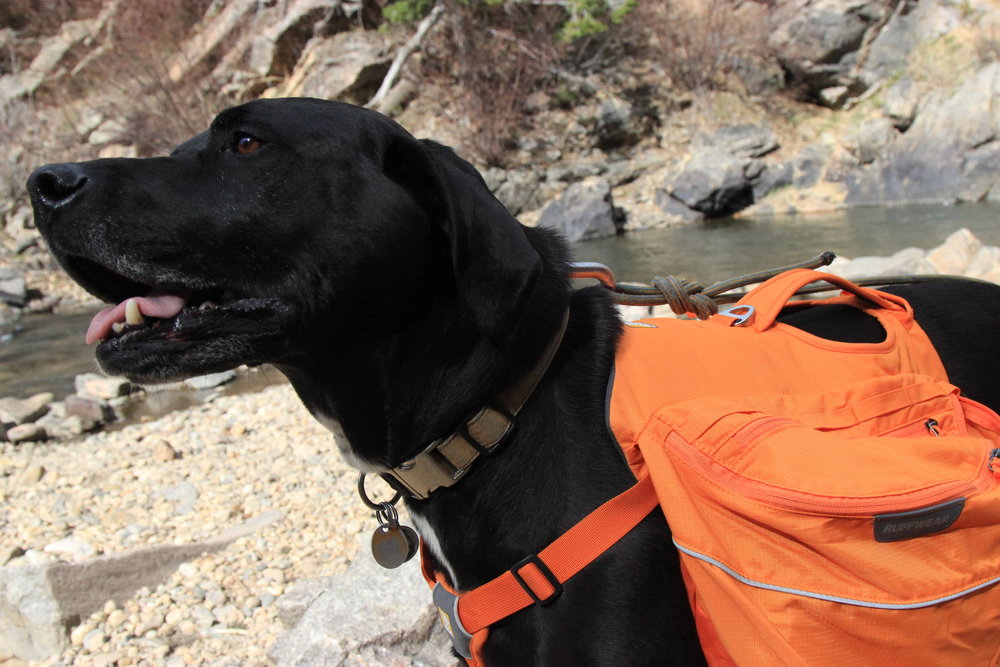 Delanie over at Write At The Moment had a serious ‘what the . . . ? ‘ moment recently when she unearthed an UNUSED dog backpack she’d had over 5 years.  While, as a professional organizer, this doesn’t really surprise me (oh my, if I shared some of the things I find with clients!), what surprised and impressed me was that she decided to make a pretty awesome project out of it.  This pack is making it’s way around the country and recently landed here, in Franklin, TN just in time for Pumpkinfest.  Many of you have seen my enormous lab, Lulu, in various photo ops on my blog . . . and here she is again in all her packed up glory!

I’ve had a lot of people ask how we got Lulu, so here’s the story.  We’d always had dogs but they’d all passed on (our last great dog, Spencer, died of lymphoma several years back) and we’d downsized significantly.  Our current bungalow is all of 1060 s/f.  So we didn’t want another dog.  Really. But we were visiting my sister in Pennsylvania and she says, oh so casually, “Well, I don’t know if you were thinking about getting another dog…” totally ignoring me as I’m frantically shaking my head and waving my arms in a very obvious NOOOOOO fashion behind my daughter whose eyes lit up and my husband whose eyes also lit up as soon as she mentioned the fateful words “…and it’s a chocolate lab pup on her way to the pound this weekend”.  Gaaah.

Apparently this family had bought this puppy from a breeder.  An adorable chocolate lab who grew and grew and grew.  Then she, with no socialization or training, became a bit, shall we say, rambunctious?  So she got chained up on the back porch with a bucket of water.  They were taking her to the pound because she was ‘too wild’.  A 9 month old lab that was ‘wild’.  Go figure.  Within minutes, she was fetching for my daughter and niece, and when I found her sprawled out on my husband’s lap I knew we were done for.  Back from PA she came with us.  First thing we did was hire a dog trainer.  Second thing was getting her spayed and up to date on shots.  Third was regular visits to the dog park until she calmed down.  Took about 3 years.  But here we are.  And she is the ‘best dog ever’.

The pack experiment really called to me because this is so something I would want to buy.  And never use.  I mean, think of the practicality.  It stores stuff! The dog can use it! We can give her a job like Cesar Millan says! Yeah, right. I come across this sort of thing all the time with clients.  They say, well, it seemed like a good idea at the time!  Isn’t it cool? And I ask, have you ever used it? Well, no.  But it’s really cool and I’m sure I will someday.  Yeah, right, says me.  I say that in a really loving and caring way.  But seriously. Why do we buy this stuff in the heat of the shopping moment? And then try to figure out where to store it, use it, care for it?

We did have a great time with the pack in downtown Franklin at Pumpkinfest.  Lulu carried bottles of water and bags for, well, whatever one needs bags for when one has a dog. Here’s Lulu with the guy from JayJay’s food truck (they serve food from Red Pony which is fantabulous).

With living a more simple life, I’ve been giving this a lot of thought and have come the conclusion that a lot of it is simply impulsivity and reactivity. While most of my clients are quite smart, competent people, it is really hard to plan when you are busy and trying to make it through the day.  I get these amazed looks from them when I suggest they sit down at the end of each day and recap how it went, then plan for the next day to be efficient and effective.  It makes sense.  But it also takes time. When they do this, though …watch out.  Enter serious time management and a sense of control over life.

An organized life is about being pro-active and mindful about what we do, where we go, what we commit to AND what we buy.  So next time you are tempted by something cool and shiny, stop and think. Save it for later. Ask yourself if you really will use it.  Whatever it is.

Thanks to Delanie (who is NOT a hoarder, just someone with the normal clutter we all have!) for giving me the opportunity to participate in this project.  The pack is now off to New Jersey to visit Stacey Crew at My Organized Lifestyle.  Hope it fits on her pug – better tighten up those straps a lot cause my 95 pound lab was straining the limits!

Get tips and tools for organizing your life right in your inbox.